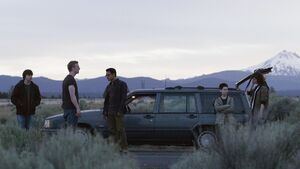 Mirror Mirror is the sixth episode of the second season of The OA and the fourteenth episode overall.

As BBA and the kids head west, an alarming news report forces them to speed up their plans. Jesse wrestles with lingering trauma from the shooting.

BBA and the boys continue their journey across America. Their car breaks down and they hitchhike to a restaurant, where Jesse theorizes that they should head to Treasure Island in San Francisco to look for Prairie. They realize through television that they're wanted fugitives, and that an Amber alert is put out on Buck, a minor. They flee to avoid attention and take a bus trip to the house of BBA's dying uncle Carl in California where they stay for a day. However, things take a tragic turn when Jesse fatally overdoses on Carl's medication and the group tries to save him to no avail. They leave, but Steve stays behind to hopefully revive Jesse a second time. Unsuccessful and exhausted, he suddenly shaves his head. Meanwhile, Buck, Angie, French and BBA mourn Jesse's loss at a motel room and discuss going to Treasure Island, until Prairie's psychologist, Elias, arrives at their room and suggests that they should continue on with their journey as he claims that Prairie is going to need their help on her journey as the OA. The group then decides to trek to Treasure Island.

A list of all people who appeared in this episode...