Chapter 5: The Medium & the Engineer

Chapter 5: The Medium & the Engineer
Edit This Page 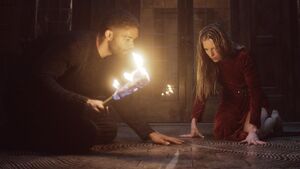 The Medium & the Engineer is the fifth episode of the second season of The OA and the thirteenth episode overall.

After a harrowing ordeal, OA and Karim find themselves locked inside a labyrinth of puzzles. Nagging doubts prompt Homer to snoop on Dr. Percy.

Prairie and Karim go through a sewer that leads them to inside the house on Nob Hill. They then solve some of the house's puzzles together, until they somehow split from each other. Karim explores the labyrinthine sections of the house and finds an unconscious Fola. He breaks through one of the walls, and escorts Fola, managing to save her in the process. Prairie journeys deeper inside, where she comes across a flock of living, telepathic trees that tell her that Hap is planning to make a powerful discovery that would make her lose her faith. The trees warn Prairie to form a tribe and that Nina is the key to doing so. Meanwhile, Homer comes across incriminating files that implicate Hap's involvement in CURI as his recorded conversations with Ruskin recall the history of the house. He also uncovers Hap's lie about Rachel, as he finds out that Rachel wasn't sent to another clinic. Meanwhile, in Elodie's apartment, Hap tries to knock out Elodie to use for his experiments. However, she catches wind of his intentions and uses cubes of dancing robots that initiate the movements, sending her to another dimension and killing her. A shocked Hap leaves the premises.

A list of all people who appeared in this episode...