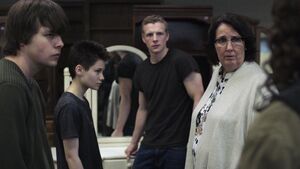 Magic Mirror is the third episode of the second season of The OA and the eleventh episode overall.

In Michigan, Steve begs the gang to try jumping to another dimension, and a presence in Buck's mirror inspires an unlikely pilgrimage.

Back in the original dimension, Prairie died after being shot at the school. Her companions struggle to cope with the loss: Buck and BBA are about to move away; Steve and his new girlfriend Angie debate about teaching the movements to others to continue Prairie's legacy; Jesse becomes depressed following his brush with death; French struggles with his faith to OA. Suddenly, Buck sees a vision of Rachel on his vanity mirror and contacts the group, but the vanity was sold behind their back to a faraway department center, forcing them to drive hundreds of miles to successfully get the mirror. They take sanctuary at a church, and French temporarily splits from the group and has a one-night-stand with a man who recommends a psychic in Nebraska for support. The group then treks there, but the vanity accidentally gets broken. At the psychic's house, she helps Rachel come into contact with the group through a television. The group deducts through Rachel's messages that Prairie successfully made it to another dimension, and that it is "only safe for BBA to go" there.