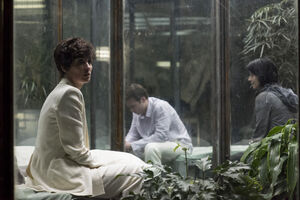 Paradise is the fifth episode of the Netflix series The OA.

While Hap zeroes in on a new test subject in Cuba, Homer and OA work to perfect their escape plan. Scott reaches his breaking point.

Hap visits Cuba hoping to convince an NDE survivor, Renata, to come back with him to the US and participate in his study. She refuses. Hap returns to the compound and notices the strange movements that Prairie and Homer are doing. He also watches as the two touch hands through the glass. Jealous by this development, Hap steals Homer away and flies them both to Cuba. Hap instructs Homer to lure Renata to their room so that they can kidnap her and take her back with them. Homer does and the two end up having sex. Hap plays the sounds of their coupling in the compound, breaking Prairie's heart.

Hap gasses the group and takes Scott to be experimented on. Scott tries to get out of it by revealing that Prairie isn't blind anymore, but Hap ends up killing him accidently after hearing this. He dumps his body into one of the prison cells and tells Prairie that she is responsible for his death. Homer and Prairie start doing the movements and continue on through the night as Rachel and Renata watch from their cells. In the morning, all of Scott's blood returns to his body and he comes back to life. Scott tells him that he's learned the third movement.

Prairie tells the group that she wants to teach them the five movements so that they can open a portal to another dimension. She will use this portal to reach her friends and save them from Hap.