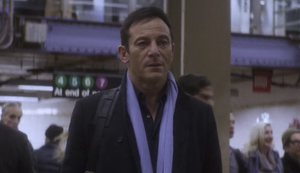 Dr. Hunter Aloysius Percy, known as Hap, is a mad scientist obsessed with Near Death Experiences (N.D.E's). He kidnaps people who have experienced N.D.E's and keeps them under observation at an isolated compound.

“Your music it's Russian, yes?”

Hap first meets Prairie when he hears her playing music in the subway. It catches his attention because he feels the transcendental vibe in it. Hap approaches her, asks whether it is Russian music and introduces himself. He asks her if she has had a Near Death Experience (an N.D.E). Prairie pauses and is silent, confirming that she did.

Prairie and Hap stop at a restaurant near the subway. Hap discusses his interest in the idea of consciousness and where it goes after they die. Hap then shows Prairie a device that can make heartbeats audible. Prairie uses this device to listen to Hap's heartbeat and her own. Prairie is extremely excited about his work and she asks Hap if she could go with him to be studied. Hap agrees and travels back to his house via Hap's air-plane.

They arrive at his house and Hap decides to escort Prairie downstairs to her 'bedroom'. However, Hap's true intention was to capture Prairie and keep her as a captive in a science experiment.