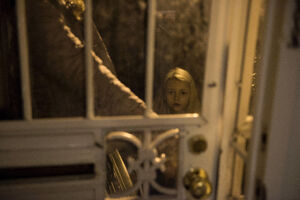 “The biggest mistake I made was believing that if I cast a beautiful net I’d catch only beautiful things.”

New Colossus is the second episode of the Netflix series The OA.

The OA retraces the dramatic twists and turns in her life after a childhood accident, leading up to a fateful encounter far from home many years later.

After the near-death experience that left her blind, Nina was sent away to live in America. She attends a boarding school for the blind and speaks with her Dad every Sunday by phone. He tells her that soon they will be reunited. He ends up dying before that happens and she is sent to live with her Aunt, who runs a brothel. There she takes care of the babies and helps clean house. She catches the notice of Abel Johnson and Nancy Johnson, who were there to buy one of the babies. Instead, they take Nina home with them and rename her Prairie.

One night, Nancy catches her speaking Russian in her sleep. They take her to see a doctor who puts her on medication that will stop her from having these outbursts. She takes those pills for most of her life until she decides to go looking for her Dad. She goes to New York but is disillusioned when she doesn't find him right away. So she decides to play her violin in the subway every day hoping that will catch his attention.

Instead, her music draws Dr. Hunter Aloysius Percy, a man obsessed with near death experiences (NDE.) He convinces her to go home with him so that he can study her. Home is an isolated location in a cold climate, apparently accessible only by private airplane. There she is imprisoned in a glass-walled enclosure in the basement with three other people, two of whom are Scott and Homer. They give her a disheartening orientation to her situation. She introduces herself as Prairie.