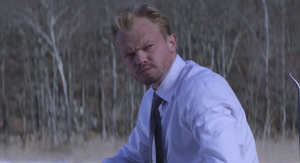 Roman Azarov was The OA's biological father. He was a very wealthy man targetted by The Voi.

Roman lived in Moscow, Russia, with his wife in their mansion. His neighbours in the town he lived in were all as wealthy as he was, they included a man who drilled oil, one who dug coal, and another who made cable.

The birth of Nina

Roman's wife died giving birth to his daughter, Nina Azarova, who now goes by the name, The OA. He was forced to raise Nina on his own, who he called his little cabbage. He would comfort her when she had nightmares so bad it would make her nose bleed.

One day Nina came to him with her nose bleeding after having her recurring dream of being trapped underwater and Roman decided he had to do something about her fear. He told his assistant to reschedule all his appointments and took Nina to a frozen lake where he cracked a small hole in the ice. He reminded her that the only way to beat the cold is to become colder, and told her to get in the water. This resulted in her not having any more dreams of drowning.

When it was time for Nina to go to school, he sent her in a private bus that picked her up and then the rest of the kids in the neighbourhood. One day, on the way to school, her bus driver became unresponsive and crashed them off a bridge into the water and Nina wasn't able to make it to back to the surface on time. She later called this a message from The Voi telling the wealthy parents that they were not all-powerful. Roman found his daughter and brought her to the shore, where she had revived but without her sight.

Sending his daughter away

Since all the other children involved in the bus crash had died, but Nina had miraculously came out alive, Roman felt that for her safety this must be kept a secret, so he sent her away to a boarding school for the blind in America. He told her that he would return to her when he could.

Every Sunday night he would call Nina for her to play him a song on violin, which she perfected after her near death experience. One Sunday he told her that she needed to stop speaking Russian until they meet again.

Nina found out from her headmistress and her aunt that he had died in an accident, although Nina was convinced he was just in hiding. Nina was taken to live her her aunt, who was now struggling with money since the payments Roman had been giving her were now cut off.

Dreams of the giantess

Roman's daughter, now given the name Prairie Johnson by her adoptive parents, dreamt of climing on a giantess's face to see her father holding 21 wax candles. These dreams continued for years, so Prairie took it as a sign that he was waiting for her. She ran off to the Statue of Liberty for her 21st birthday, thinking that was the meeting place, but she didn't find him there.

She played her violin in the subway, hoping he would hear her, but this plan was only met by more problems.

Roman's daughter, now The OA, sees him during one of her NDEs. To OA's vantage in Khatun's Hut, he is just out of reach and cannot see her. She chooses to go back to the reality she came from to help the other captives and find out who she really is.

Roman's daughter did not go blind in this dimension. He raised her into adulthood, and shared many happy memories celebrating life with her in Europe and America. He was shot to death while in his bathtub by business associates. By the time OA had travelled to this dimension, Roman had already been killed. His daughter Nina kept photos of him in her San Francisco apartment. These photos helped OA from Part I piece together Nina Azarova's life.