Chapter 8: Invisible Self
Edit This Page 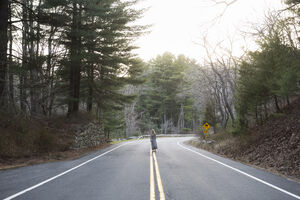 Invisible Self is the eighth episode of the Netflix series The OA.

After OA recounts a dramatic final night at Hap's, the others begin to see her story in a new light. The fragments of the dream click into place.

The Sheriff confronts Hap and it seems there may be hope for OA and the other captives. However, Hap convinces the Sheriff that if he lets Hap go, then Homer and OA will heal his wife, Evelyn, whom Hap knows has been suffering from ALS. The Sheriff agrees to let the two try, but if they fail then he's taking Hap to jail.

Hap collects OA and Homer from their cells and instructs them to do the movements over Evelyn. He leaves the room to watch with the Sheriff on video camera in the next room. Homer and OA debate if they should comply with Hap, or wait it out for the Sheriff to calm down and arrest Hap. They see she is suffering from her illness, as she sneezes, but her body is frozen, held captive by ALS. OA decides that they must try to heal her, otherwise they are not the Angels they claim to be.

They begin to perform the movements to heal Evelyn, but are stopped by the Sheriff's wife halfway through. Evelyn reveals to them the fifth movement and says she's been waiting for them for a very long time.

Hap and the Sheriff come into the room shortly after but Hap kills both the Sheriff and his wife after having learned the movement as well. He Homer and OA embracing and threatens to shoot Homer if OA does not step away. He drives her out into the middle of nowhere and abandons her, as he has no need for her anymore now that he knows all five of the movements. She runs after the car as it leaves not wanting to leave her friends behind.

As the story ends, the group realizes that they are no longer alone and that all of their parents have shown up at the abandoned house. Abel, Nancy, and OA are now ostracized from their neighborhood and move into a hotel temporarily. There, OA finally tells them about her time in captivity. Nancy finally confesses to Abel that OA did leave behind a note all those years ago, resulting in a disagreement between the two. OA wakes up and tries to contact the Crestwood crew. She finds BBA's number is unlisted and that she doesn't know French's last name.

Steve and French search the Internet as they try to prove that OA's story is true, but all they find is a video of Prairie playing her violin in a New York City subway station. That night, French sneaks into the Johnsons' house in search of clues. He does not find any clues; instead, he finds books on Russian oligarchs, angels, and NDEs, and a copy of the Iliad (by the ancient Greek poet Homer). To his surprise, he finds Elias Rahim in the house with him. Elias comforts French and validates him for listening to OA's story to help her heal. French then meets up with Buck, Jesse and Steve to show them the books. Shocked and upset, they walk away without saying much. Buck keeps the book about Angels for himself.

Some time has passed. OA is working on a garden with Abel, and we see their house in Crestwood in for sale. No sign of Nancy. Betty has been fired from the school and the boys continue to go on with their separate lives. OA is back on medication but has a vision while in the bath. She begins running towards the school where a shooter begins to open fire in the high school cafeteria. BBA is on her way out, after collecting her things. Principal Gilcrest pleads with her to exit the school for safety. She drops her belongings, exclaiming "My Boys'", and runs towards the shots, to where Buck, Jesse, French, and Steve were in the cafeteria with the shooter. They begin to perform the 5 movements and succeed in distracting the shooter. The gunman is taken down by a cafeteria worker. Everyone is saved but the gun goes off as he hits the ground. Everyone seems to be fine but as the group turns, the see that Prairie is standing by one of the windows and has been shot in the chest.

She dies on her way to the hospital but seems to wake up in an all white room. The last thing she says before the season ends is, "Homer?"