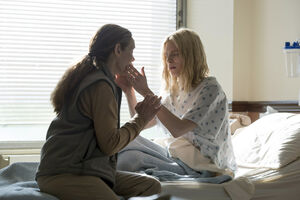 Homecoming is the first episode of the Netflix series The OA.

A woman missing for seven years turns up at a hospital with strange scars on her back but can't --or won't-- reveal where she's been.

Prairie Johnson is hospitalized after she survived jumping off a bridge. Her parents take her home where they keep her cooped up and away from the media's prying eyes. Prairie is desperate for Wi-Fi so that she can search for someone and makes a deal with Steve Winchell: she'll pose as his mother to get him out of going to military school and he'll pay for her to have internet access. She agrees and manages to get him a second chance, until his teacher finds out what he did and the whole thing blows up in their face.

How she was born with the name Nina, raised in Russia by her father and how he taught her to be brave. One day on her way to school, her bus is pushed off a bridge and plummets into the water below. Everyone dies - even Nina. She wakes up in a room filled with stars. A cloaked woman asks her if she wants to stay or go back. Nina decides to go back, and the woman says okay but that she'll take her eyes because what lies ahead of her is horrible.